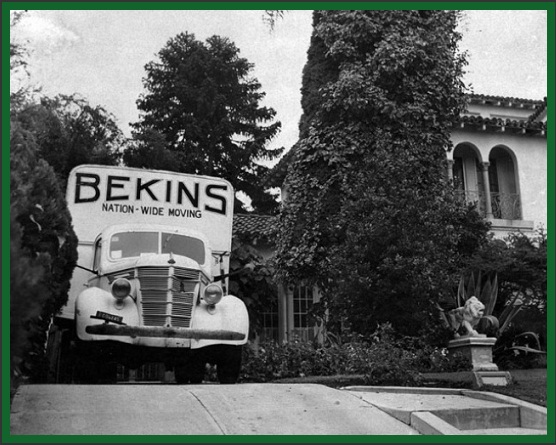 A word on the maturation
of Berkeley Square

There are many reasons for the decline of West Adams; as for that of Berkeley Square and similar Los Angeles neighborhoods, the main cause may have been the prosperity of the 1920s, which resulted in the proliferation of the automobile (allowing even servants to live beyond the radius of the old Yellow Car system) and in the desire of the affluent for the luxury of more space around their houses. Berkeley Square was one of several small  enclaves of large houses in the city that were surrounded by less glamorous, denser neighborhoods, a profile unlike many of the newer, more expansive and cohesive districts of larger lots and houses. The general prosperity of many West Adamsites in the Roaring '20s was augmented by their good fortune of living in a city that saw its population more than double during the decade, resulting in a housing shortage that drove up property values enormously and caused saavy families—some of them resident in West Adams for generations—to sell at a high profit and decamp to newer, roomier parts of town to the north and west (or to consistently fashionable Pasadena). The new owners of West Adams houses often divided them into apartments or replaced them with larger multi-unit buildings. Also, with Los Angeles expanding so rapidly, there were some West Adams building lots on which single houses had never been built and so were perfect for apartments once a determined developer succeeded in altering the zoning of his lot. Later, the Depression held back maintenance on the aging housing stock, increasing demolitions; the war years repeated the housing pressures of the '20s and renewed the wisdom of exploiting land for all it was worth. When the U. S. Supreme Court struck down race-based deed restrictions in 1948, white flight from West Adams (and other neighborhoods close to downtown ) to the north and west accelerated at an even faster rate, especially as the San Fernando Valley became attractive to the middle class. The desire to find racially homogenous new neighborhoods was the story across the country in the '50s and '60s, and Los Angeles was no different than any other American city. As far-flung as the city was becoming, the freeway was written on the wind. Almost continuous white flight since the '20s had dealt West Adams a mortal blow in terms of its political clout, which makes plausible the theory that the route of the Santa Monica Freeway was moved south into declining West Adams and away from its original projected path near such neighborhoods as Hancock Park and Windsor Square—the rich precincts of many former West Adamsites. While it has been suggested that there may have been an attempt to make a point by demolishing the high-profile ambitions of some African Americans, the relatively low density of Berkeley Square in particular seems more likely to have been a reason for its having been targeted, offering a path of least resistance in the scheme of freeway builders. Some observers have suggested that in addition to its placement, the freeway was designed with limited south-north access—restrictive housing covenants in another form.

Berkeley Square has vanished, but West Adams, anchored by the University of Southern California, thrives, even if it is only a hazy entity to many Angelenos whose families began their lives there generations ago.