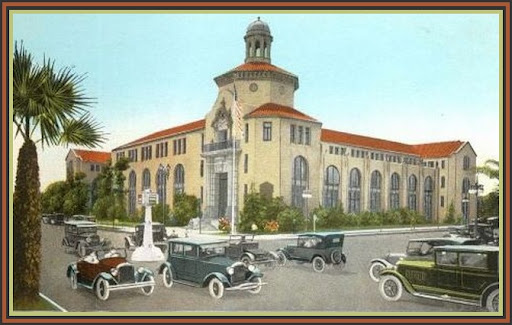 One of the most obscure Berkeley Square houses in terms of any architectural or photographic documentation is #17, built on Lot 11 in 1924, nearly 20 years after the Burke house at #6; it was one of the last to go up behind the gates. Its owner, however, wasn't obscure, but rather one of the builders of Los Angeles. Horace Gilbert Miller dealt in iron—both the kind used in construction as well as the kind from Detroit. Born in Meriden, Connecticut, on May 21, 1864, he was married and had a son by the time he arrived in the Southland at the age of 27. The obvious thing to do in a city of such meteorological charms, available land, and pioneer spirit was to build, or at least to get into the game of supplying materials for building all the downtown office towers and all the bridges, pipes, conduits, aqueducts, and sewers that were coming together in Los Angeles at a furious pace as the 20th century approached, and beyond. The 1900 census indicates that Horace was already in the iron business, referring to him as a manufacturer. He and his wife, née Ada M. Patchen, born in Connecticut in 1866, had been married since 1887, and they were obviously prospering. The sizable house they built in 1898 was (and remains) at 1593 West Adams Street, which had become the most fashionable thoroughfare in town. Later the Millers acquired a beach house at Balboa. Their son Robert had been born in 1888 back in Meriden; daughter Margaret arrived 10 years later in Los Angeles. 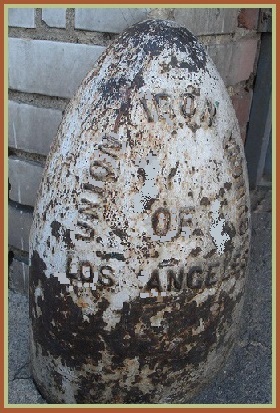 A corner bollard doubling as advertisement

Horace ascended through the corporate ranks of Union Iron Works, holding the office of secretary-treasurer for many years. After attaining the presidency of the firm by the '20s, he and Ada decided that digs more in keeping with his new status were in order. Lot 11, having remained empty for nearly 20 years, had been adding to the sense of spaciousness of the Cheneys' property next door—and their house at #15 already stood on a double lot. Whether it was the Burkes who had held onto the unimproved Lot 11 all these years, or whether it was someone else—possibly even the Cheneys—who had been sitting on it is not known. There are a number of possibilities here as to ownership, as several lots on the Square seem to have been bought for speculative purposes by a few random names we've been able to connect, though not specifically, to various real estate transactions in the Square. In any case, Miller wound up with Lot 11 and part of Lot 10; on May 13, 1924, the Department of Buildings issued him permits to begin construction. The Millers were in residence at #17 by 1925. It appears that the firm with which Sumner Spaulding was then associated, Webber, Staunton & Spaulding—designers around the same time of Malaga Cove Plaza at Palos Verdes and Harold Lloyd's Greenacres in Beverly Hills—were the architects.

Robert and Margaret had married and were living in their own homes in Los Angeles by the time their parents left 1593 West Adams Street for the Square, he to Helen Porter Candler in 1916 and she to pediatrician Dr. Ezra Simpson Fish in 1923. With the children launched, #17 seems to have been intended primarily for the business and other entertainments the wife of the president of a major manufacturing concern and of a man holding several corporate directorships (including at the Pacific National Bank) would have been expected to stage. In 1929, three Los Angeles iron manufacturers merged to form Consolidated Steel—Union Iron Works, Baker Iron Works, and, interestingly, the Llewellyn Iron Works, owned by the family who lived on the Square at #7, just four houses east of the Millers. Horace's executive role in the merged concern is unclear; by the mid-'30s and into the '40s, however, he was president of Southwest Engineering. One gets the impression that Horace's real love was not so much stationary iron as the rolling variety, so he would also have been wanting to entertain in his new Berkeley Square home the men involved in matters automotive. He'd long been active in the Automobile Club of Southern California, serving on the board of directors since 1911, later becoming a vice president and attaining the presidency of the club by 1927; in his efforts to build up the organization, he was among those behind the construction of the ACSC's palace-like headquarters designed by Hunt & Burns, seen at top and still standing at Adams and Figueroa. But after half a century of steady, thoughtful accomplishment in personal, business, and civic affairs, something seems to have happened. 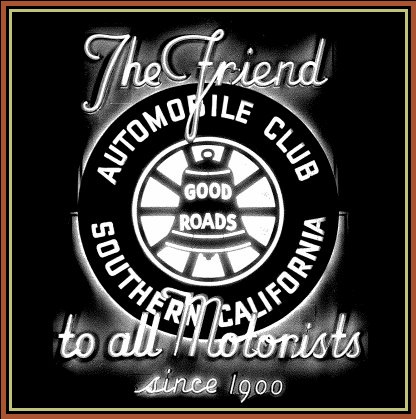 This neon sign first appeared on the façade of the headquarters of the Automobile Club of Southern California
at Adams and Figueroa between its affiliations with AAA (1903-1915 and 1946-present). An early
director of the club was Alfred F. Rosenheim, architect  of the gates of Berkeley Square.
Horace G. Miller served as president of the Auto Club from 1927 to 1929.


The Millers remained on the Square into the 1940s. Horace turned 80 in 1944; while still, remarkably, at Southwest Engineering, he and Ada were failing. Their house was put on the market in the summer of 1945, with ads referencing its "gun room, vaults, and solarium." Ada died in Los Angeles in January 1946 a month shy of her own 80th birthday—perhaps it was her death on top of his retirement from Southwest a few months before that sent Horace into a tailspin. While Ada retreated to Forest Lawn, Horace's next stop before joining her was Pasadena. While not far from the Huntington Library in San Marino, he was to have an address that was exclusive, but not in the way most people would like to be set apart. The reason could very likely have been something more along the lines of Alzheimers rather than his being otherwise of unsound mind or an alcoholic, but in 1947 Horace moved into the private Las Encinas Sanitarium, where he was to live for rest of his life. Whatever his mental malady, Horace was not so crazy as to forget to maintain his listing in the Southwest Blue Book. The 1950 edition of that local version of the Social Register listed Horace's address as 2900 Blanche Street—now East Del Mar Boulevard—where Las Encinas remains in operation today in buildings that include a few by the architect of several Berkeley Square houses, Myron Hunt.

In their last few years at 17 Berkeley Square, the ailing Millers were joined by their daughter and son-in-law, whose medical skills, though geared to the other end of life, would have been helpful. Horace died at Las Encinas on November 5, 1955, at the age of 91. He left his two children, five grandchildren, and eleven great-grandchildren—all in all, despite his final eight years, a vital and constructive Angeleno.

Attorney Arthur Garrett and his family bought #17 from the Millers in 1945, and, according to city directories, remained there until 1960. It was during that year that condemnation proceedings began on the north side of the Square; #17 and the addresses of all other houses on that side are absent from city directories after the 1960 edition.