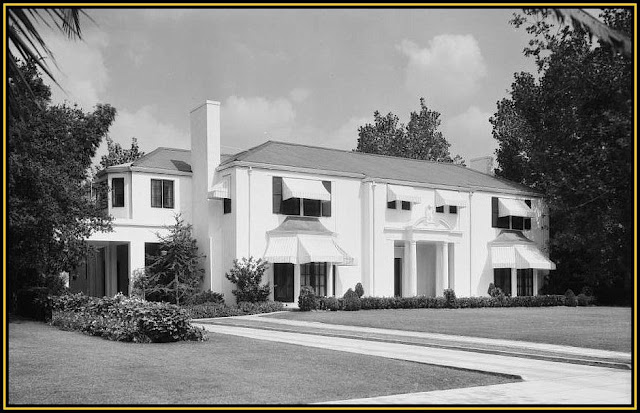 While #3 was among the houses that could be called latercomers to the Square, the couple that built it in 1923 were old timers. Willis Gustavus Hunt had come from Maine to Los Angeles as long before as 1888, founding the Pioneer Paper Company the next year. He and his wife, Miriam, were also not new to Berkeley Square, having lived for a decade at #5, the Myron Hunt–designed house they bought from Lee Allen Phillips in 1912 when it was addressed #4 for one of its lots and after Phillips built the new #4 across the street. (Berkeley Square is a real-estate Gordian knot, isn't it?) But let's not get ahead of ourselves.

After leaving #5 in 1922, the Hunts (not to be confused with the aforementioned architect Hunt) moved to Glendora while looking for a new place to build. It seems, however, that a bit of seller's remorse caught up with them. They were back in the Square in short order—right next door to their old house, in fact. They acquired the west 40 feet of Lot 2 and the east 60 feet of Lot 3, commissioning Gene Verge to design a house very modern in comparison to their former residence; Verge, popular in Hollywood, would not long after design a Beverly Hills palazzo for Buster Keaton. A building permit was issued in the name of Mrs. Hunt on July 26, 1923, and called for a 20-room, $40,000 house; as completed in the fall, the Times reported, Verge's "Italian Colonial" design had 12 rooms and had cost the Hunts $65,000. Its heavy-duty slate roof was produced by one of Willis Hunt's manufacturing concerns, as was the special wall sheathing, used inside and out, to which plaster and stucco reputedly clung especially tightly—it was a new material called Buttonlath. The Department of Buildings issued a permit for Verge's complementary garage and servants' quarters on October 23. 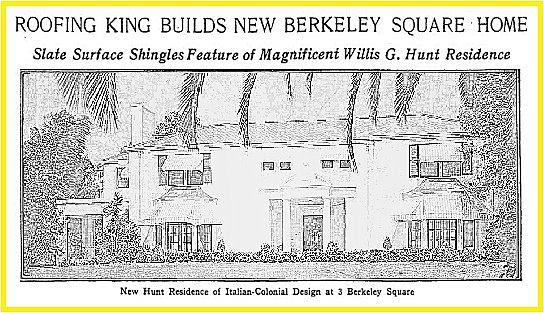 
Only a few years later, the Times reported that "prominent club woman" Miriam Hunt—I can't help but imagine the resemblance of some of the ladies of Berkeley Square to the stout matrons often seen in Three Stooges comedies—died at #3 on September 19, 1925, after a long illness. While her time in the new house was short, it seems that Willis spent only a little more than the requisite year in mourning before bringing a new bride to Berkeley Square, Nelle Blackburn of New York. The new couple remained at #3 for another 13 years. Willis died at home on March 23, 1940, age 77, mourned by his wife as well as his fellow members of the California and Jonathan clubs. 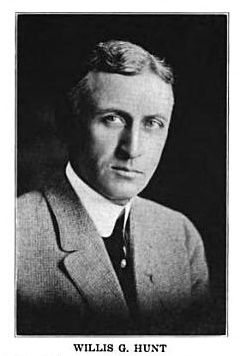 While haute bourgeois Los Angeles has the reputation of shunning Hollywood, Hunt scion Willis Jr., perhaps inspired by his father's daring employment of Gene Verge, took to movie folk in a big way. Described as a yacht broker but more often as a playboy, since leaving home Junior had been living high off the hog in the Sunset Towers on the Strip, worlds away from Berkeley Square. He was a private pilot, and he loved motorcycles—he had friends in the L.A.P.D. for whom he sometimes filled in dressed in full uniform, apparently just for the thrill of racing around town on a bike, presaging Brando and Dean. The ladies noticed young Willis, of course, including starlet Carole Landis. The two became engaged within weeks of her divorce from her second husband and the demise of his father (I'm sure it was grief that drove him into the arms of La Landis), and they were married on the Fourth of July, 1940. Four months later—Splitsville. The introduction of Junior and Landis more likely took place not on a bike but rather in the connection of another Berkeley Square household to the movies—in due course we'll be reading about #22, the longtime home of producer Hal Roach, who was Landis's employer circa 1940. It's likely that Willis Junior and Hal Junior were childhood playmates on the Square (perhaps inspiring the Our Gang comedies). At any rate, before marrying Landis, who was to commit suicide in 1948, Willis Jr. had been married—for a year—to Hancock Park oil heiress Dolly Brewer, who later, and very cozily in Square terms, married Hal Roach Jr. 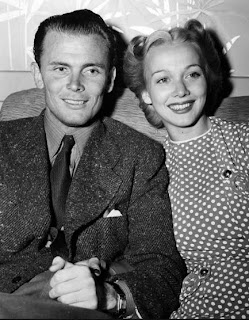 After 30 years, the Hunts would be gone from the Square, among those who, one way or the other, got out while the going was good. The Great Depression and resulting changes in West Adams demographics did the big houses no favors in terms of their values. They were fast becoming white elephants, too expensive to maintain, and selling them became doubly difficult as potential buyers were looking toward Hancock Park and Windsor Square, Beverly Hills, the Westside, and Pasadena. 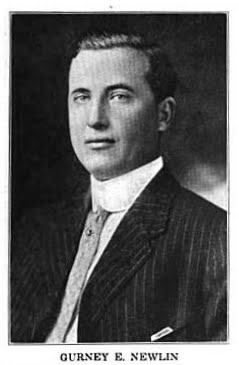 But some Angelenos must have figured that the Rosenheim gates might be able to hold back the changes a little longer than could the rest of West Adams. Among them were corporation lawyer Gurney Elwood Newlin, born in Kansas of Quaker roots. His father brought the family to Los Angeles in 1887 and that year became a founder of Whittier. Gurney went east to Haverford, then to Berkeley where he was a Deke a few years ahead of Carleton Burke, and then was graduated from Harvard Law in 1905. A man of great accomplishment, he was at one time president of the American Bar Association, was the founder of the L.A. chapter of the American Red Cross, as well as a Union Oil board member. During the first World War, he held the rank of major in the U.S. Army and was in charge of Red Cross operations on the line from Saint-Quentin to Verdun as well as in Paris. Neither was he a slacker in the club department, claiming among others the California, the L.A.C.C., the Pacific Union and the Bohemian. He and his wife were living at #3 by 1941, and were stalwarts along with a surprising number of Square denizens who remained longer than they might have in the face of a rapidly changing central Los Angeles. Newlin died at #3 on May, 4, 1955, age 74.


Allen and Sara Durette, who were living at #3 by early 1957, seem to have immediately begun running something of a casino, both in the old-fashioned as well as the more contemporary senses of the word. Among the entertainments taking place at the Durette house reported by the Los Angeles Sentinel were a Champagne Party thrown by Geneva M. Davis and her Shangri-La Club Girls in July, followed by the Knit-Cro-Sheen Club's Pink Patio Soirée and the Les Petite Mesdames' Hawaii Party in August. Even after a series of raids by the LAPD and federal agents in June 1959 in connection with suspected income tax-evasion and gambling operations in the city prompted the arrest of, among others, the Durettes—was #3 filled with slots and stripped of clocks?—the house was still an event venue. As late as November 1960—with bulldozers poised to plow through the north side of the Square—an after-party following the exclusive Black and White Ball took place at #3. The next week the house was the setting for a benefit the Les Dames Social and Charity Club threw for the Urban League of Los Angeles. Full of life to the end, the old Willis Hunt house was one Berkeley Square swankienda that never outlived its original purpose as a place to impress and with room for lavish entertainments.

Gene Verge designed for Willis Hunt one of the most attractive, modern, and timeless houses facing onto Berkeley Square. Its rear façade is no less charming: 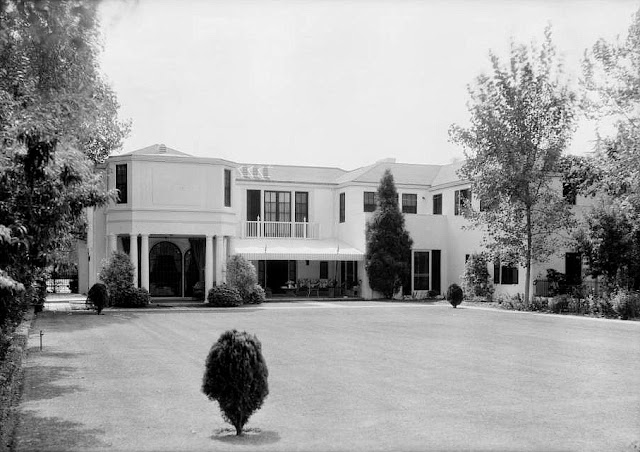 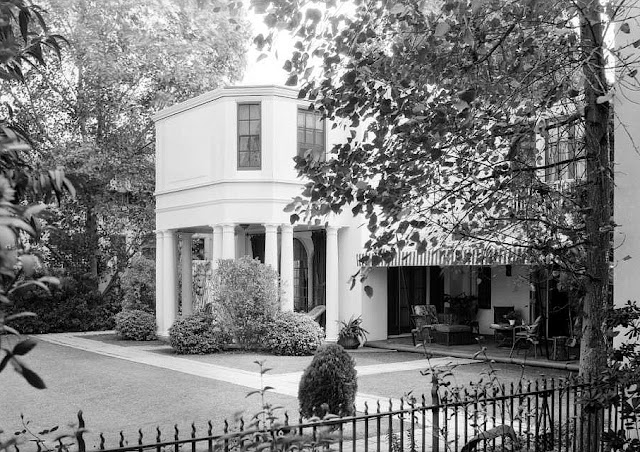 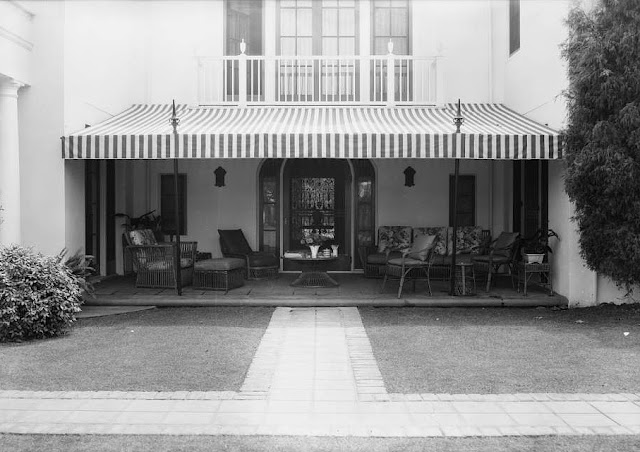 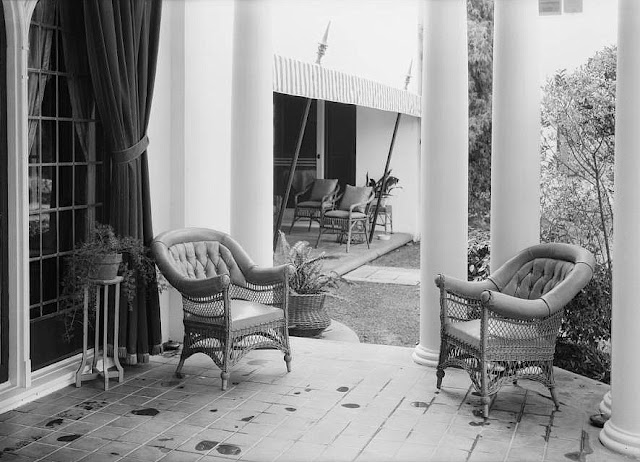 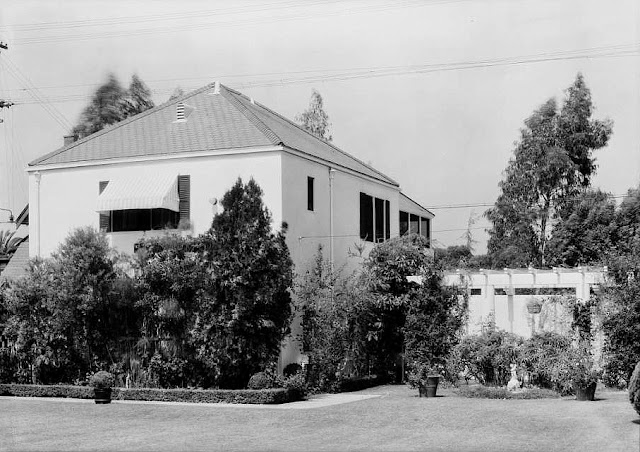 A view north from the house: The garage, with servants' quarters above, could be entered
via the driveway from the Square as well as from a private service alley.